Building the World Through Blockchain 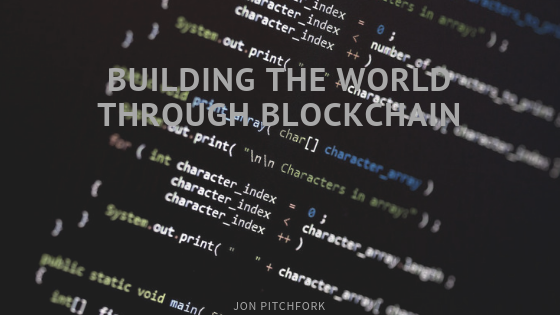 If you’ve spent any time watching the hit Netflix show Black Mirror, you may feel that technology is irreversibly changing the world, for the worse. Technology is simply a tool. We should not look to blame our tools but take responsibility for making better use of them. While at times things look grim, technology can be applied in many ways to spark positive change in the world.

In particular, blockchain technology has immense transformational power. Initially developed for Bitcoin, some players in the blockchain sphere are looking for ways the technology can be used to move humanity forward. Two United Nations programmes, UNICEF and World Food Programme, have developed a for-good use for the technology.

UNICEF developed a programme earlier this year that utilised the computers of PC gamers to mine Ether (ETH for short is the token of value that fuels the Ethereum network, loosely equivalent to Bitcoins on the Bitcoin Network). The mined cryptocurrency was to be donated to children affected by the war in Syria. When the gamers were finished using their PCs, they would turn on the programme, which then used the spare capacity of the computer to mine Ether. Over 59 days, the programme, titled Game Chaingers, used more than 12,000 computers and raised 85 ETH, towards UNICEF’s work in Syria.

The World Food Programme (WFP) has created a way to use blockchain to help tackle world hunger. Building Blocks has currently benefited more than 100,000 refugees. It uses blockchain for making cash transfers more efficient and secure. By using cash transfers, the WFP gives local populations the ability to purchase their own food and make their own decisions regarding hunger. WFP plans to develop the programme further, and use blockchain for digital identity management and supply chain operations.

Blockchain can also be used to give more people access to voting during elections. Voting is a necessary act to ensure your government works towards the issues that are most important to you. In the United States, certain members of the military who are currently serving overseas are being given a chance to vote in elections through a blockchain-based app. By building voting systems on blockchain platforms, disenfranchised populations could potentially have access to voting and be confident in the integrity of the voting system.

A United States-based start-up, BanQu aims to help people that are under- or unbanked, which means they have no access to credit cards, bank accounts or other financial services. Often, these individuals are unable to access these services because they have no established credit history. BanQu is changing that by allowing refugees and impoverished populations to establish a financial history through blockchain. When users of the technology interact with businesses and organisations, it builds a financial history which is then accepted by financial institutions as an economic identity.

If you haven’t read it already, there is some more background on Blockchain in the Decentralisation and Blockchain page.