How Virtual Reality is Transforming Medicine for the Better 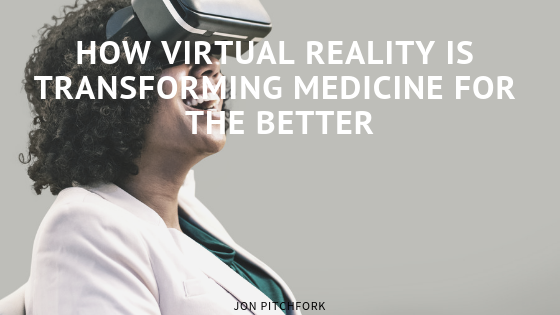 While virtual reality is high-tech these days, it wasn’t always so advanced. Headsets used to cost around £58,000 and weigh so much a brick was necessary for counterbalance. Fast forward to present times, and most headsets cost less than £155 and weigh around a pound. While the headsets and technology is most currently used and associated with video games, it has the potential to make its biggest impact in the health and wellness field.

Even in its early days, it was used successfully in medicine. One early success was SnowWorld in the mid-1990s. The program immersed burn victims in a snowy landscape where they were able to throw snowballs at cartoon snowmen and penguins. While patients were in this frozen world, nurses were scrubbing their wounds, changing dressings and stretching scar tissue. A 2011 study showed that there was a 44 percent decrease in pain among 54 children in burn units when using the VR session. The kids also stated they had fun using the technology.

During the aftermath of the 9/11 terrorist attacks in the United States, researchers developed a VR program for survivors of the World Trade Centre suffering from PTSD, or post-traumatic stress disorder. The technology has been redeveloped in order to help soldiers returning from war deal with their trauma. Called Bravemind, the program is being used at approximately 100 sites in the U.S. The approach is similar to exposure therapy, where patients revisit the source of their trauma with guidance from a therapist who helps them in creating a less intrusive and more coherent memory. Instead of just visualising the scene of their trauma, patients using VR are fully immersed in it. While that may sound like it would be more harmful than helpful, the opposite is actually true. A 2010 study looking at 20 patients found that after VR treatment, 16 no longer met the criteria of PTSD.

VR may also be helpful in diagnosing mental illnesses. Currently, anywhere from 35 to 85 percent of mental illnesses go undetected and undiagnosed. VR can create realistic simulations that may provoke certain symptoms of mental illness, and do so in a consistent fashion, making diagnoses less subjective. The Alzheimer’s Society has stated they would fund a three-year research project to determine the effectiveness of using VR to detect early signs of Alzheimer’s. A preliminary study has already been conducted by researchers at Cambridge University. They tested patients spatial navigation and memory by making them navigate an L-shaped path in a virtual environment and then trace their steps back to their starting point. The team reported that their method had greater accuracy in diagnosing mild Alzheimer’s-related impairment compared to traditional gold-standard cognitive tests.

In a laboratory run by a behavioural neuroscientist at Stanford University in America, there are 20 clinical areas where VR is currently being applied. Some of the ways it’s being used is to help addicts practice refusal skills, by placing them in situations where they need to be able to turn down the substance being offered to them.

The hope of researchers is that the use of VR will help make mental health care cheaper and more accessible, especially to people living in rural areas.